Never Out of Reach

19 September 2019 – Liberty Industrial have added a number of custom built High Reach Demolition Excavators to their state of the art fleet of demolition plant and equipment. The newest addition is considered a game changer for the Australian demolition industry.

This latest addition is a custom built Kocurek modified Hitachi Ex1200 High Reach Demolition Excavator weighing in at 200 tonne. Affectionately dubbed the Swiss Army Knife of demolition excavators, the machine has been designed with versatility in mind, equipped with a range of working heights and attachment sizes.

The machine also has a dedicated telescopic front, reaching an impressive 60 metres with a 3.5 tonne attachment, making it the highest reaching Demolition Excavator in Australia.

The converted EX1200 was shipped direct from Hitachi in Japan to Kocurek in the United Kingdom where it underwent a six month conversion process. Approximately 4000 man hours went into the conversion of this machine.

The machine was designed and built specifically for undertaking work in Australia. It needed to be able to break down for transport to comply with all weight, height and width restrictions for Australian roads, and be economical to move.

A second Hitachi Ex1200, already within Liberty Industrial’s fleet of demolition excavators has been modified to carry a 10 tonne attachment at 20 metres reach and two new 48 tonne Volvo EC480 Excavators have been fitted with three stage high reach booms that can be configured for 24 or 26 metres of reach.

These machines are fitted with a full range of demolition attachments including concrete crackers and shears for the demolition of concrete or steel structures, as well as the latest state of the art warning systems to ensure the machine remains stable and within its safe working range.

Liberty Industrial Director Simon Gill said that the machines have been purpose built for demolition with safety at the heart of their design. “They are perfectly designed for the industrial environment with heavy steel at height such as mining process plants, power stations and oil and gas infrastructure.”

The introduction of the high reach fleet further reinforces Liberty Industrial’s risk minimisation strategy which is focused on the removal of personnel from the demolition workface.

“These machines enable us to demolish large and heavy structures without the need to preweaken them and reduce the need for our crews to work at height.”

The new machines have been deployed to demolish redundant mining process plants and refinery infrastructure in regional parts of Queensland and Victoria.

Liberty Industrial is Australia’s leading provider of deconstruction and remediation services. We are progressive thinkers who challenge the status quo and leverage technology to deliver innovative and resourceful solutions that create value for our clients, project partners and stakeholders. Liberty Industrial has received international acclaim for the delivery of some of Australia’s largest and most demanding demolition projects ever undertaken. The company has set itself apart by establishing an enviable reputation based on integrity and technical capability.

Below images available upon request 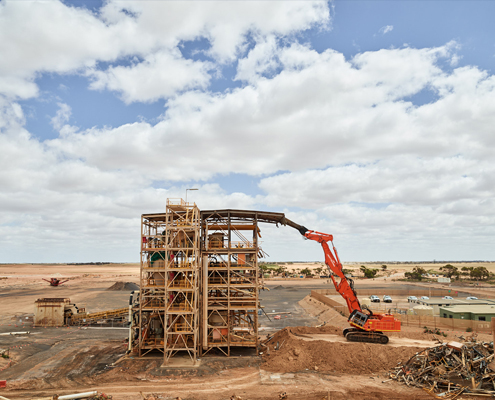 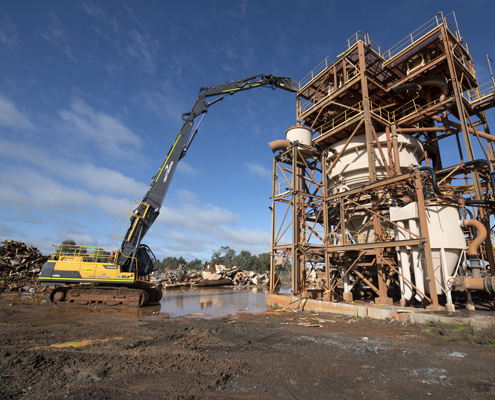 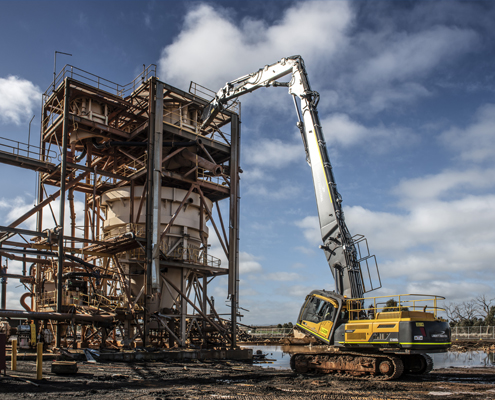 Want to stay up to date? Subscribe to our Newsletter!

Liberty Industrial Shortlisted for Four International Awards
Scroll to top
We use cookies to optimise site functionality and enhance your experience. By clicking “Accept”, you consent to the use of ALL the cookies.
Cookie SettingsACCEPT
Manage consent

This website uses cookies to improve your experience while you navigate through the website. Out of these, the cookies that are categorized as necessary are stored on your browser as they are essential for the working of basic functionalities of the website. We also use third-party cookies that help us analyze and understand how you use this website. These cookies will be stored in your browser only with your consent. You also have the option to opt-out of these cookies. But opting out of some of these cookies may affect your browsing experience.
Necessary Always Enabled

Performance cookies are used to understand and analyze the key performance indexes of the website which helps in delivering a better user experience for the visitors.

Analytical cookies are used to understand how visitors interact with the website. These cookies help provide information on metrics the number of visitors, bounce rate, traffic source, etc.

Advertisement cookies are used to provide visitors with relevant ads and marketing campaigns. These cookies track visitors across websites and collect information to provide customized ads.

Other uncategorized cookies are those that are being analyzed and have not been classified into a category as yet.